At this point we’ve covered practically all there is to know of the bridges that cross the Grand Canal. First of all, there are four of them: The Rialto Bridge, The Accademia Bridge, the recent Constitution Bridge (better known as Calatrava, the name of the architect who projected it) and The Scalzi bridge, that is found in front of the Santa Lucia train station.

Known also as the “Train Station Bridge,” the Scalzi bridge is found directly in front of the church of the same name (the church hosts the confraternity of Carmelitani Scalzi and their beautiful vegetable garden.) The bridge was constructed for the first time in 1858 from the English Engineer Alfred Neville – under the Austrian/burg domination- with the purpose of facilitating a comfortable connection for citizens as soon as they arrived at the newly built train station. 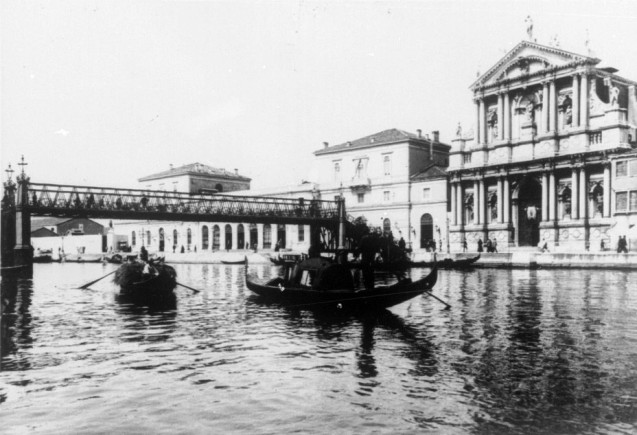 The Scalzi Bridge was built in cast iron, on a rectilinear structure, very similar to the construction of the Accademia Bridge that had been recently projected by the same Neville. Unfortunately, the industrial style didn’t quite fit with the surrounding buildings and the missing arch prohibited boats with taller masts to pass under. For this reason it was decided to build a new bridge in stone.

The bridge built entirely by Istrian stone on one singular arch was finished on the 28th of October 1934, projected by the engineer Eugenio Miozzi, is the same one as seen today.  The Scalzi Bridge allows you to cross the Grand Canal in a strategic zone that connects the quarters Cannaregio and Santa Croce. At the peak of the bridge you can observe the two openings of the Canalasso: on one side the route towards Piazzale Roma and the “new” Constitution Bridge. The other water path instead conducts to the first canals“curve” of the Venetian dorsal, which is in correspondence to the entrance to the Rio of Cannaregio.

BOOK NOW YOUR APARTMENT IN VENICE